Riding Japanese transit (JR + Osaka subway) for five hours daily the past two years, I had lots of time for people watching. 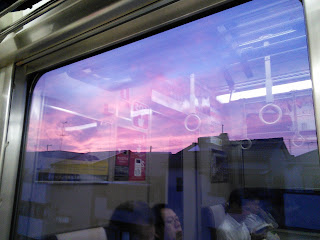 One thing I observed on a daily basis was the Japanese 'flinch game.' Usually participants were two males, students from elementary to high school, although the occasional undergraduate pairing could be seen. One participant would take the role of 'attacker', the other 'defender.' Attacker would stand in a relaxed stance, hands weaving in front towards Defender. He would make taunts towards Defender, while saying words like "omae na" (this guy!) or "yaru zo" (here I come), if memory serves, before making feints and attacks in the form of pokes, prods, smacks, or light punches.

Defender would be clinging to overhead rack or strap, legs closed at knees to protect groin, free hand out front or across chest with elbow towards Attacker. Some would make protestations like "yamero" (cut it out), but most would be quietly twisting body or arm to deflect attacks.

On occasion, Defender would overtly block a feint, hit back, defend against a false attack, scream or otherwise do something that broke some unwritten rule. Defender would then lower defenses and submit to a punishment smack or pinch from Attacker.

Both Attacker and Defender would be laughing throughout the flinch game. As many of these games as I witnessed, I could never discern the rules to the interaction, nor did I ask questions as I so wanted. It reminded me of Fox's (1991) early 20th century anthropology of fights among Irish laborers, about which he commented, "it was not chaos and mayhem, but ritual in the simplest sense. It was entirely rules-governed, though no one could have told me what the rules were - in the same way that language is rules-governed" (153-154)

I estimate having seen near or over a hundred such interactions in my travels spanning 5 days a week for 30 weeks over two years. I wish I had had the energy and equipment to film or record these flinch games.

In terms of discourse, I suspect a few were in operation in the regulation of the game.

First would be the discourse of senpai-kohai, or superior-inferior that dominates so much interaction in Japan's vertical society. Although as mentioned I never talked to participants, I strongly suspect senpais were mostly Attacker, while Defender was a kohai role. The subjectification and reinforcement functions of these roles is clear.

Second, the changing Japanese definition of violence is another discourse on display here. Japanese popular culture has several instances of interaction that would be termed 'violence' from a western standpoint but are not considered such here. There is the 気合い入れ (kiaiire) or strong pat on the back with an open hand or even kendo sword to get one motivated for a contest or trial. There is also the binta, a face slap between friends that is met with laughter, as well as the many types of headslaps visible in Japanese manzai comedy routines. Rapidly disappearing is the genkotsu (knuckle to head) , a staple 'education technique' I witnessed in the countryside during my teaching days there in the 1990s, but which is rapidly coming under the heading of 'corporal punishment' in urban centres such as Osaka. Normalized or acceptable corporal punishment at schools is still a problem in Japan (Kobayashi 1997).

The question is, what role does the flinch game serve? How is it regulated, and what happens when the Attacker transgresses with too much real instead of ritual or symbolic violence? I think this last ambiguity is where power harassment and other forms of violence propagate in Japanese society, and need to be looked at in detail.