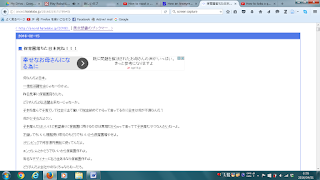 The post appeared February 15th, in the season in which Japanese mothers search for schools to put their children for April start. It was brought up in government debates, but dismissed by PM Abe as an anonymous and unreliable source. This was met with protests of Japanese wearing signs saying “It was me!” expressing solidarity with the original poster. The Abe regime responded by launching a new day care plan and providing new funding, which was a factor in Japan’s largest postwar budget, despite poor economic performance.

Currently, I identify three ‘debates’ that dominate Japanese public discourse, as is evident by their appearance in media and public protests. There is the nuclear power discourse, in Japanese datsu-genpatsu (脱原発) involving such issues as government response to the Fukushima disaster, as well as Japanese use of nuclear issues. Second, there is the ‘Militarizing Japan’ discourse, centered around kennpo-kaizenn (憲法改善), which would allow collective self-defense and increase Japan’s role in foreign peace-keeping missions for the UN. Last, is the problem of what officials call Japan’s Aging Society Issue, or shoushika-mondai 少子化問題. Although the government uses this term from its viewpoint of having to pay for an increasing number of retirees with less tax income from working age people due to decline in births, the flip side of this is the popular discourse of lack of support for child-bearing families specifically, including lack of daycare, lack of support for mothers returning to the workforce, and virtual non-existence of paternity leave or support., This latter problem and its entailed viewpoint is the stance of the ‘Die Japan’ poster.

Yet neither of the previous two discourses have attained the change of the latter. First, both issues are too broad for popular support. The nuclear discourse especially stretches from Fukushima response to waste disposal, nuclear power regulation, and allowing US nuclear weapons into Japan. Next, both issues require specialist knowledge, which prevents many Japanese from commenting on them. Finally, both are separate from daily life for many Japanese, and thus are beyond topic of discussion. In this way, in the debates on nuclear power and Japanese military, the official discourse is dominant, and no organized or effective opposition can be raised against the status quo. This is not the case with the third debate, where the government discourse of supporting women is contradicted by the everyday experience of many Japanese, as the protests inspired by 'Die Japan' indicate.

In other words, ‘Die Japan’ is part of an anti-discourse, challenging and contesting the official discourse of adequate government support for women returning to work. There have been other responses to this problem, such as the appearance of companies that allow daycare on site, allow flexible working hours, and the rise of ikumen（育メン）or men who step outside the traditional work role to take a greater part in raising children. Although CDA is generally used to analyze official texts for examples of strategic domination, it works equally well for uncovering how anti-discourses challenge existing domination, and this is how I will use it to unpack ‘Die Japan.’

The ‘Die Japan!’ post is a polemic, a frenetic mix of tough talk and political rhetoric. Government ‘buzzwords’ from the Abe plans are thrown back at politicians, as well as their own scandals. In terms of genre, it is best classified as guchi  (愚痴)、best translated as 'grumbling.' This is a uniquely Japanese form of communication, in which the calmness and objectivity that characterizes discussion which might be termed 'hot debate' in other cultures is utterly dropped in favour of a no-holds barred critique of the object. This critique is based on the subject's bitter personal experience and wry observation or even mocking of the object's discourse. 'Guchi' is usually limited to family or personal acquaintances. It is thus the very antithesis of the studied and serene speeches of PM Abe, both in tone and substance.

A word about genre of social messaging is also relevant here.
Posted by Tedankhamen at 5:43 PM