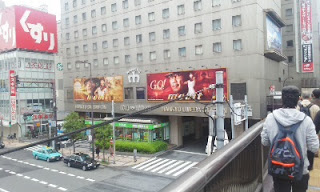 These billboards are visible on my way to work every morning, when I walk from the Japanese Railway Osaka Station to switch trains at the Umeda Hankyu Railway Station. Both billboards are advertising Mobit, a payday loans company here in Kansai.

Both boards are variations on the same themes and images.

There is the face of actor Naoto Takenaka, best known for the smash hit film Shall We Dance? that inspired a remake starring Richard Gere. Takenaka's enlarged head stares wistfully out of the board, eyes piercing through circular-rimmed glasses, a fedora on his head, stubble on his chin and looking tanned and vigorous. Next to the Moa-like bust of Takenaka is a reduced halfshot of actress Natsuna in a red silk dress playing violin. Natsuna became an actress after being scouted for her beauty and became star of several TV dramas.

The contrast between the two images is strong. The man is dressed conservatively, even his eyes are covered. The woman is in red silk dress, arms, legs and head bare. Her clothing exudes femininity, openess, approachability, a red of strength and sexuality in direct opposition to his detached watcher's face and muted tones.

The genderized message is clear. Women need loans to be sexy and alive, to be and make the art the man appreciates. The loan allows the woman to be watched. The man conversely is deepened by the loan, made wiser and stylish, and in the position of observer.

Men are targeted in another way - the billboards can also be read as inviting men to become 'sugar daddies', patrons of women who become works of art.

Does this approach match the population of users? Let us consider that the top three users of such loans are women 40 - 49 years old (25.8%), women 20-39 (20.9%), and men aged 40-59 (19.1%). This 'double targeting' of middle-aged men and elision of middle-aged women, who are both already a large customer base and not considered suitable for an ad based on female sex and youth, may thus be read as an attempt to enlarge the market share of middle-aged men, who will incur both their own costs and the women they support.

Public advertisements are texts that speak to all people, appealing to their hopes and fears in the attempt to create necessity for their product. In the case of payday loans, they appeal to culturally ingrained discourses of gender relations that require finanial capital to maintain. In the case of Japan especially, the cultural acceptance of 借金 (shakkin or borrowed money/debt) in novels, movies, films, as well as the 'life stories' of executives and entertainment district workers is huge and thus impacts the psyche of the average Japanese, who sometimes kill, die, or sell themselves to pay off their or other's debts.

This is a larger topic for another time.