Ancient Wonders and the Backward Worldview 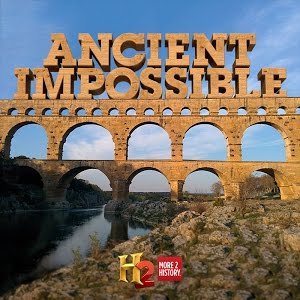 I was watching Ancient Impossible on the History Channel and was struck by the hegemonic discourses it presented as self-evident truths. Particularly, the discourse of relativist historical valuation and the obfuscation of inequality were striking. The synopsis from the History Channel's website exhibits these two epistemic positionings:

"A mega factory is a modern invention--wrong--the ancients were the first to build these thousands of years ago. What was the incredible 16 wheel Roman automated factory in the south of France which could feed 12,500 people a day? How did the ancient Egyptians produce hundreds of vehicles of war every month? How did the Romans forge enough iron to equip an army, and mine enough gold to keep an economy afloat? With today's technology, this would be achievable, but how did the ancients do this thousands of years ago? We reveal the impossible ingenuity and techniques that made it possible for the ancients to have "Mega Factories" of their own" (Synopsis).

First, the rhetorical question about a 'modern invention' plays with conceptions of modernity and our supposed sense of superiority over previous generations of humans. The hidden interrogative of the first line and subsequent questions also serve as distracting clickbait - a genre for drawing attention by hiding pertinent facts from the reader. What is hidden is a false dichotomy - that a 'mega factory' in a primitive society is a sign of genius, instead of the mundane mark of scientific progress filtered through capitalism that it is today. This depiction ignores two things - first, it obfuscates the objectivity of science, wherein the materials and principles for these inventions and indeed any scientific breakthrough have always been hidden in plain sight, but are too often smothered by our obsession with earthly power acquisition or divine favour. It also ignores the destructive use to which the factory is put, but the reader cannot fail to notice that the subsequent examples are drawn from military industrialization, the very definition of scientific progress turned to destruction for political ends. War is not a wonder, but an aspect of human nature as 'achievable' now as it ever was, if society is willing to embrace its appetite for destruction and the waste of human potential it entails.

Second and more troubling, the programme erases from history the individuals dominated by the wasteful and unethical practices that lead to the creation of these 'wonders'. The narrator himself is ebullient about cathedrals and underground waterwheels, skipping over the excess spending on symbolic buildings of politicized religion and the hard reality of wheel-turning slaves dying in the dark. On a moral level, these advanced 'wonders' hardly seem worth the ethical costs they demand, considering their flimsiness when compared to modern buildings, and the inequality between those who created the cathedral or water wheel and those who carried bricks or walked in the dark should force us to question the 'wondrous' nature of these constructs.

This dichotomy leads to the major motif of the show - that these buildings and their creators were ahead of their time. This dangerously gets the reality backwards. These ancient societies, who turned their production to the destructive enterprise of war, who kept slaves, and whose genius inventors came from a small elite portion of the population, were in fact centuries behind where they should have been had they embraced democratic education for all, and the allocation of resources towards human progress. Pushing this narrative of 'wonders' puts forth what Foucault (2003) called an elite scientific discourse of war (50), one that uses the rightness of war, in this case symbolized by the 'wonders' which were no more than proto-capitalist mechanisms of war, and that silences the voices of those it dominates.

Put bluntly, when we look back wistfully at the 'ancients', we should see that it was precisely their moral retardation that held them back and prevented them from advancing themselves, and consequently us, further. Only educated elites could see where they should be and make 'wonders' that we surpass everyday in our more educated and equal world.

On the other hand, we in advanced countries have stopped making the wonders that came at breakneck pace since the Enlightenment, trading an inward-looking, comfortable post-scarcity lifestyle for resource exploitation of other parts and peoples of the planet, all enforced by unending wars. As futurist William Gibson (1995) famously quipped, "The future is here, it is just distributed unevenly" (Science, 11:55). What does this say about us and our moral advancement? Or more importantly, how will humans of the future see it?