We from English speaking lands tend to think of Japan as an alternate world where alien rules of conduct apply. Such is not the case. Japanese society is structured around group dynamics like any other, dynamics which exist in any country, but whose socio-cultural triggering conditions are different.

This week, two events with different details but similar characteristics show this universality of group dynamics, be they Japanese or foreign, especially in the context of public displays of regret or contrition.

First, in Japan the CEO of the 'Hare no Hi' (Beautiful Day) corporation, Shinozaki Yoichi, has been the centre of media attention and popular ire. Hare no Hi supplies kimonos for Seijin no Hi (Coming of Age Day), a once-in-a-lifetime public event where young people are recognized as adults, dress up, go to their city or town hall, hear speeches from local authorities, then feast and drink to celebrate the transition of becoming shakaijin (members of society).

Hare no Hi and similar companies take reservations years in advance to ensure the kimono of their clients' dreams on that special day. Every detail is chosen by customers, who also pay thousands of dollars for the privilege. 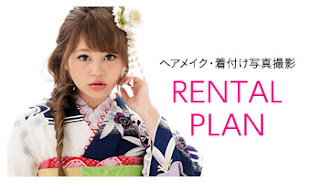 This year, Hare no Hi reneged on its obligations, leaving hundreds of young people without the necessary garments on their special day. According to Shinosaki's lawyer, this case involves upwards of 1600 customers, with a loss of 630, 000, 000 yen that might reach 1, 000, 000, 000 yen (NHK).

Women especially were hard hit, as they had paid thousands for furisode, long sleeved kimonos that signal their single status, thus symbolizing also the movement towards the next steps of marriage and starting a family. The furisode kimono is highly connected to female identity in Japanese society.

On the surface, then, this is a uniquely Japanese 'kimono scandal' that would leave North Americans, with their comparatively inexpensive high school grads, shaking their heads in disbelief. Yet in Japan, it is a clear-cut case of a company and its CEO neglecting to fulfil its societal duty.

In keeping with this judgment, Japanese media have framed the Hare no Hi president in ways that emphasize his dubious morality and blatant greed. An interview with his 'friend' quoted Shinozaki as saying, "First of all, think about yourself first before the customer." Japan is known for its 'service seishin', or spirit of hospitality towards the customer, and the CEO's words, although perfectly acceptable in a neoliberal context such as America, portrays Shinozaki's betrayal of Japanese cultural values. This has the effect of framing the CEO as the villain of this mediated narrative.

Additionally, in the past few days the CEO has reappeared and talked with the press. On this morning's news, an interview with the CEO was shown and discussed. The points of emphasis were two:

1) The CEO laughed as reporters asked him about his hobby of singing, and whether he did so while in hiding from the outrage that blew up during the event.

2) The interview was performed as the CEO walked 3 km between stations, then back again.

First, the emphasis on Shinozaki's laughter paints him as callous and out of synch with public opinion. Having been a former police translator, I can attest that the formal expression of sadness or regret is highly significant in Japan. On the level of everyday life practice, most Japanese pride themselves on having tatemae, an unresponsive front or face presented to the world. There are times on life where this facade is dropped and (from a western perspective) excessive displays of emotion are expected. When women read a letter to parents at their wedding, or when an athlete talks about winning a particularly arduous event, tears are a welcome sight. Similarly, when being interviewed or interrogated about a transgression, tearful displays of regret are expected, even demanded, and met with outrage if not given. Guilt is decided as a result of this questioning; in Japan, the innocent man breaks down in tears, while the guilty bluffs or laughs. This is, generally speaking, the opposite of western patterns of response, where an innocent person is rightfully outraged, and the guilty are expected to hang their head in shame.

NHK coverage of Shinozaki's conference oddly used the same quote from a 19 year old woman who hadn't received her furisode kimono. The woman is quoted as saying, 「謝罪していましたが誠意が見えず、不信感を持ちました」, which translates as "He apologized but I can't see any sincerity, I still feel distrust or suspicion." The repetition of this quote by the NHK, whether intentional or not, testifies to the resonance of the sentiment and the Japanese expectation of convincing shows of sincere emotions such as regret. Added to this, the focus on Shinozaki's long walk paints him as an oddball, one who doesn't ride the train like all other labourers, and thus is even further left behind Japanese society. 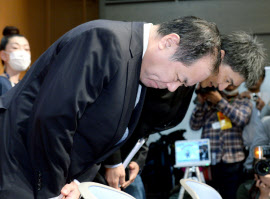 The importance of public apology is not limited to Japan. In their examination of apologies in courtrooms, Rachlinski et al (2013) note,

Because they are so common and so critical to harmonious social life, apologies can serve many different social functions. Generally speaking, apologies tend to play the role of a social palliative, mending relationships between the wrongdoer and the aggrieved party or the community.  Effective apologies convince the victim or victims that the wrongdoer’s conduct should not be taken as evidence that the wrongdoer is as blameworthy as the conduct otherwise might imply.  Apologies are intended to convince the recipient that the transgressor’s actions reflect a less malevolent mental state or that the transgressor’s long-term proclivities are not as destructive as his or her exhibited behavior would suggest. A successful apology restores at least some of a transgressor’s status as a trustworthy individual (1195)

Meanwhile, in the US, the trial against former US Olympic coach Dr Larry Nassar for his sexual abuse of patients has focused on victim's statements and demands for apology and shows of remorse or contrition. Coverage of the trial in Guardian (Grahamn 2018) also reveals that performative aspect of the event and the expectations of public apology, as well as repercussions when they are not met. The article focuses on the judge, Rosemarie Aquilina, when she reads aloud the defendant's letter requesting mercy, a staged performance with a prop like the aforementioned Japanese wedding letter, ending in the cliche “Hell hath no fury like a woman scorned.” The article notes,

"That line drew an audible gasp in the courtroom, and when she had finished reading out loud Aquilina tossed the letter aside in disgust. When Nassar refused to admit he was guilty in the final minutes before he was sentenced, stammering meekly “I’ve said my plea”, the judge handed down the maximum term – 40 to 175 years." (Grahamn 2018)

The 'audible gasp' is the manifestation of public shock, while Aquilina's tossing aside of the letter is a theatrical response to both the insincerity of its existence and the sentiments expressed within it. The final refusal to admit guilt is the confirmation of Nassar's lack of sincere emotion, which justifies his long prison sentence. This is the natural outcome when a sincere apology is not offered, for as Rachlinski et al (2013) explain,

The power of an apology to restore status makes it tempting for wrongdoers to offer insincere apologies. Appreciating the potential power of an apology, a wrongdoer might apologize disingenuously to gain some advantage. Apologies often consist of what economists call “cheap talk.” That is, apologies can be costless utterances for the transgressor that hold out the promise of restored status. An apology might need to be costly to transgressors in order to show that they are willing to pay a price to prove they are worthy of trust, particularly if the underlying conduct is egregious. Some conduct is so severe that a meaningful apology is simply impossible. In many circum- stances, however, merely stating an apology can benefit the wrong- doer, making it tempting to offer a feigned apology. People understand this well and react negatively to apologies that they perceive as insincere.  An insincere apology can suggest that the wrong-doer is willing to attempt to deceive the victim, thereby adding insult to injury. Alternatively, an insincere apology suggests that thewrongdoer does not truly understand what it is that he or she did wrong. Statements like, “I am sorry you feel that way,” hardly even qualify as apologies and might suggest that the speaker is affirmatively stating that he or she is not remorseful, especially if said in a sarcastic tone. Either way, an insincere apology makes the wrongdoer and the misconduct seem worse. In effect, attempting to apologize raises the stakes for the wrongdoer, making both redemption and reprobation more likely. (1196-1197)

Indeed, the reports of Shinozaki's inappropriate laughter and long walks clearly depict such a 'malevolent mental state', and fulfil their intention of framing the CEO as not a 'trustworthy individual.' In Nassar's case, these are signified by his letter, an obviously insincere response to the victim's statements he objected to hearing. Indeed, Nassar's actions decided his crimes, but his letter helped fashion his own punishment.

Although Nassar's crimes are unforgivable, especially in comparison with those of Shinozaki, the failure of both men to offer symbolic acts of contrition and regret explain the length of Nassar's sentence to some degree, just as it explains the condemnation of Shinozaki by Japan's media and the court of public opinion that feeds on it. Judge Aquilina's treatment of Nassar's letter and her choice of a maximum sentence signal the legal price of Nasar's transgressions, both against women's bodies, lives, and society itself, especially when no remorse is shown by the transgressor. Unless Shinosaki can offer some acceptable show of regret to his victims, he too may face harsh penalties, and justifiably so.


The point in common of these two cases is that violence done against vulnerable women, whether physical or economic, and which might previously have been overlooked in patriarchal society, is now becoming a socially unpardonable crime. In the US, the Nassar allegations surfaced amid the #metoo movement, a long overdue calling out of male sexual violence, abuse of power, and predation against women that has seen powerful men toppled from their positions in entertainment, but which has not progressed in other fields such as politics. In Japan, which is arguably more patriarchal than America, nevertheless Hare no Hi's neglect has shed light on the social consequences of unscrupulously profiting off of women, betraying their trust, and not showing acceptable forms of remorse.

Grahamn, Bryan. (2018).  "'I was molested by Dr Larry Nassar': how the gymnastics sexual abuse scandal unfolded."

Posted by Tedankhamen at 9:50 PM