Public mourning has a strong presence and significance in Japan.

People stop at jizos (stone Buddhas) or small shrines to pray for lost ones. The words 'namuamidabutsu' come unbidden to the lips of travelers in historic dramas. Watching the news or talking about it with Japanese, you hear arama, taihen or kawaiso (Oh dear, That's terrible, Poor thing). These are the semi-conscious ways in which Japanese express ninjou (人情), sympathy or human feeling.

All this stops in the case of suicides on railway lines. Although colloquially called 電車飛び込む自殺 (densha tobikomi jisatsu, suicide by throwing oneself at a train), inside trains they are announced by the euphemism 人身事故 (jinshin jiko, literally human body accident). The use of 'accident' distinguishes it from 'incident' (事件 jiken), a passive term used for a crime implying criminal fault, while the use of the depersonalized 人身 (jinshin, or human body as found in collocations like 'slave trade' or 'human sacrifice'.

I have gone from a daily 5 hour to just under 3 hour commute, time which I use for reading and writing on my tablet. I haven't kept track of how many times my trains have been stopped or delayed, but it is several times a year as I pass through the urban areas of Kyoto and Osaka on my route.  I have noted reactions to the announcement - an old man beside me groans and sighs. A woman starts texting she will be late. Workmen tsk tsk. Someone laughs.

I have often wondered how Japanese people, so normally respectful in the face of death, can appear so callous regarding the no less tragic 'human accidents'.

As Saldaña (2011) notes, using the euphemism has the effect of 'shrouding' or framing such suicides as a routine part of the commute. In this context, a 'human accident' is a delay equal to 'maintenance' or 'weather warnings' and is thus equally unworthy of sympathy, except for the inconvenienced passengers themselves. The passive and depersonalized nature of the term 'human accidents' certainly contributes to this normatization of suicide-by-train.

Although the term 'human accident' may seem euphemistic, it is the perfect moniker. To the Japanese, these people are accidents, breaking over others in unavoidable ways. They have chosen to extinguish themselves in a way most visible to others, that most affects them, and worst of all, inconveniences them the most.

However, this normatization of 'human accidents' conflicts with the popular impression that suicides by train involve a high cost to the deceased's family. Possibly to prevent other suicides, a myth of high cost has grown that employs both Japanese of funeral rituals and the obligation to not inconvenience the family. Japanese urban legend states that families of human accidents' will have to pay 100 million yen in reparations - roughly a million dollars. In fact, pay puts rarely exceed 1 million yen (J-Cast 2008). This legend serves as a warning or precaution to ward off people thinking of taking their lives on the train tracks. Ironically, by affixing a high price to human accidents, Japanese common sense replicates one of the rituals of the funeral, the paying of money gifts to help cover costs of the ceremony, and appeals to the Japanese sense of family by incurring guilt of leaving remuneration costs to loved ones.

The flip side of this phenomenon is that such accidents are often caused by the quest for profit through exploitation of workers conditioned to conformity, who can only think of death as escape from work. This is exacerbated by the paucity of mental health resources, the pressure to work overtime, and to sacrifice all for the workplace, all of which combine to make the site of transit to the office also the site of the decision to end it in the most final way.

I hope to do some preliminary surveys on this topic in my classes this semester.
Sources 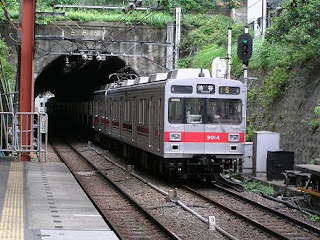