Whereas my first analysis started with a charged social problem as presented in a small text, for this next exercise I’d like to look at a longer text without any explicit social problems and tease out both its discursive structures as well as any social issues implicated by them.

It is first necessary to explain the context of English conversation teaching or ‘eikaiwa’ here in Japan. Eikaiwas in Japan are generally non-accredited teaching classrooms where Japanese people come and take lessons in mostly English conversation from mostly unlicensed foreign teachers, usually young people living and working in Japan for a short time. The instruction at eikaiwas is thus largely ‘casual’, with a lack of testing or evaluation, syllabuses, curriculum, or any other trappings of an institutional setting. Tiny local eikaiwas often run by a foreign husband-Japanese wife pair dot the land, while large corporate eikaiwas such as Nova, Geos, and Aeon dominated the casual English teaching scene in the 1980s and 1990s with prominently displayed  ‘ekimae’ classrooms close to most rail stations, so as to be convenient for workers and students. The embezzlement scandal that rocked Nova in the early 2000s began a period of lower profile for these three heavyweight eikaiwas, which are still popular but not as ubiquitous as before. Conversely, ECC has recently taken a larger profile, with advertisements on TV and in trains. ECC previously specialized in children’s English classes as taught in local spaces such as houses or community centers taught by housewives looking for extra income or to use English skills acquired in their youth, but has now branched out to business and adult lessons while relegating child classes to the ECC junior brand.

Since this ad campaign depends largely on visuals, I start my analysis with them. Color is a major element in marketing considerations, and the Satisfaction campaign is marked by the use of a neon pink textbox on white background colorscheme. This is a change from the previous ECC Beat Taheshi campaign that used a scarlet background with gold piping, which held an aura of respectability. The neon pink of the ‘Satisfaction’ campaign, by contrast, is redolent of spontaneity and creativity, allowing the customer to feel their choice of ECC marks them as such. 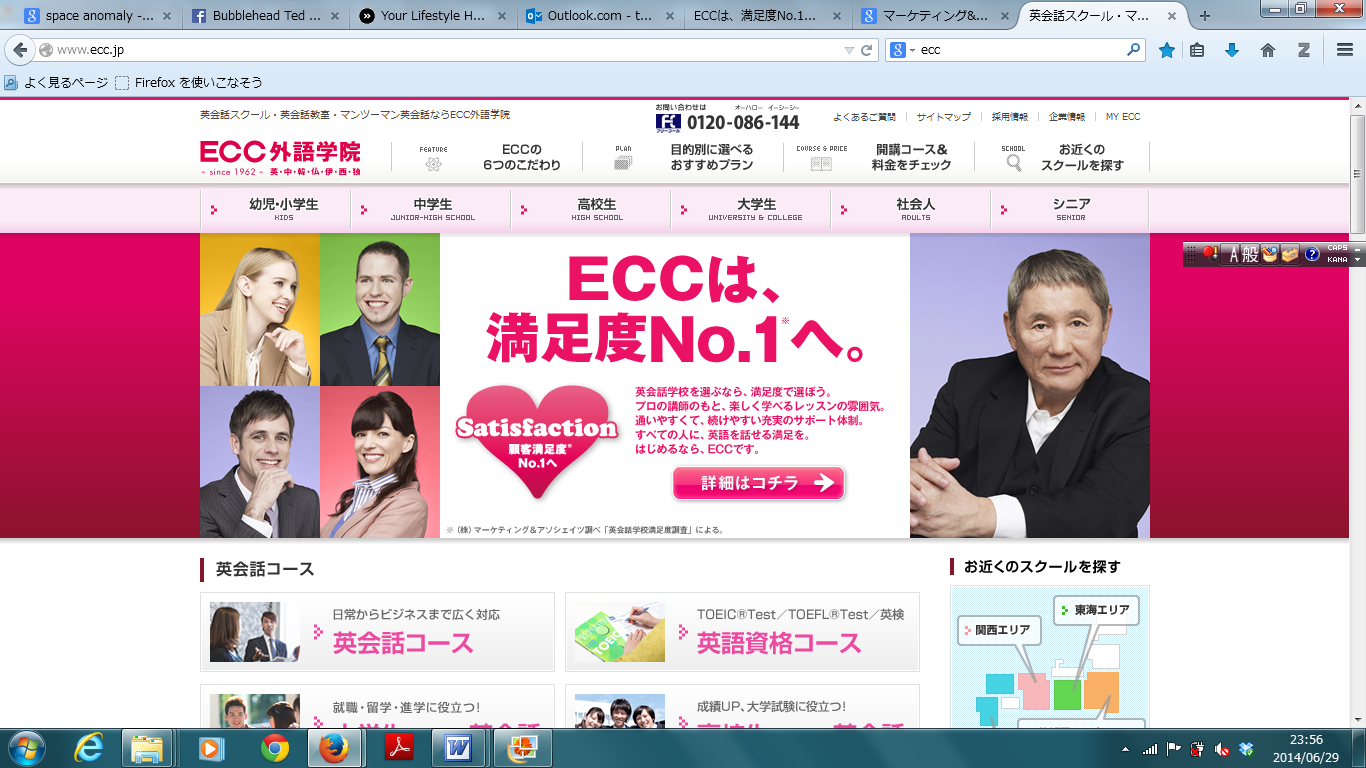 The screenshot above is taken from ECC's main webpage, and presents the dominant themes of the campaign, as well as their inherent contradictions. On the left are four foreigners, smiling and  besuited, tokens of both the 'fun' often associated with English  ‘eikaiwa’ classes as well as the professionalism denoted by their attire. Although ECC classes may be as fun as any other eikaiwa, their professionalism is just as suspect. A link on the ECC website to its '6 Deciding Factors' (ＥＣＣの６つのこだわり） begins with its claim of stringent background checks, which is belied by the detail that foreign teachers must have a 4 year university degree, but not any teaching experience or credentials.

In terms of genre, the campaign is not just a simple advertisement, but features the informative or didactive theme of survey results. This touch of ‘scientificity’ adds legitimacy to the ad’s claims, although the objectivity and validity are questionable considering that the agency performing the survey is a for-pay market research company and not an academic organization. The survey is notable for its supposed anonymity, although the use of pseudonyms for rival schools (School A, School B etc) also calls its results into question in terms of transparency.

There are number of claims made through keywords in the main statement for the Satisfaction ad campaign, supposedly, which is found on the ECC main homepage at www.ecc.jp. It is as follows:

If you’re choosing an English conversation school, choose for satisfaction.
Learn from a professional teacher, in an atmosphere of fun learning.
Easy to come to, easy to continue, with a complete support system.
The satisfaction of English for all people.
If you’re starting out, it is ECC. (my translation)

The keywords of ‘conversation’, ‘satisfaction’, ‘professional’, ‘atmosphere’, ‘fun’, ‘easy’, ‘support’, and ‘all people’ stand out and define the discourse, as do their ambiguities. First, ECC is a ‘conversation school’, thus ‘satisfaction’ is a natural aim of its discourse instead of the results and accreditation marking the discourse of schools in the education system. For precisely this reason there is no mention of results, credentials, etc, and thus it is marked as a discourse of ‘edutainment’ characteristic of eikaiwas.

Second, the mention of ‘professional’ is a claim of legitimation, despite the lack of any mention of credentials for either students or teachers. As mentioned above, ECC teachers are not required to have any pedagogic credentials or experience. The concomitant claim of ‘support’ is similarly a claim of an organizational status ECC does not have

Next, the claim of ‘atmosphere’ is ironic considering that ECC was outperformed by School E in two categories of the survey concerning this keyword, namely Quality of Instructor Atmosphere (講師の雰囲気の良さ) and Quality of School Atmosphere (学校の雰囲気の良さ). Ironically, the use of the term ‘instructor’ (講師), which is usually reserved in Japanese education discourse for university instructors, mark yet another implicit claim to educational institutional status that ECC and other conversation schools do not deserve. Similarly, the very use of the term ‘school’ （学校）to describe ECC is a calculated misnomer, as businesses of its kind are usually referred to by the term ‘English conversation classrooms’ (英会話教室), and thus another claim of institutional status it does not hold.

Moving on to the terms ‘fun’ and ‘easy’, they hearken back to the ads of the big three ekimae eikaiwa of the past, as mentioned above, and thus are an attempt to capitalize on their popular appeal. This contrasts with the claim of being ‘for all people’, which is simultaneously an appeal for new students, as well as a statement that ECC lessons no longer for kids, as implied by the aforementioned usage of the brand name ‘ECC junior’ to differentiate between children and adult lessons.

Although on the surface this ad campaign may have little to do with social issues, the Japanese public discourse of English as opportunity and English as threat noted by Seargeant (2011) is well in evidence, and has a lot to say about the conception and valuation of foreign labour in Japan. Besides Mr. Takeshi, all actors are smiling be-suited Caucasian males and females, who both iterate the native fallacy and the definition of welcoming white foreigner. The ‘native fallacy’ is the belief that only a native English speaker can impart speakable English to Japanese, a form of fetishization that stems from the school system where foreigners are found teaching English and most kids sleep through classes, preferring to get their English from Japanese teachers at juku, or cram schools that aim to help them pass the entrance exam of the high school or university of their choice. In both these cases, fluency is far from the aim or result. The addition of the prominent ‘white gaijin’ or foreigner underlines the conception of English as a ‘first world’ language, at once both accessible to the Japanese yet denied to Filipino, Indians and other ‘brown gaijin’ who have a harder time of working as English teachers despite their fluency with the language.

Seargeant, Phillip. (2011). English in Japan in the Era of Globalization. Palgrave.

NOTE: This analysis took longer than expected, so I will simply mark the paper reference here and add internet links at a later date when I am free.
Posted by Tedankhamen at 6:32 AM