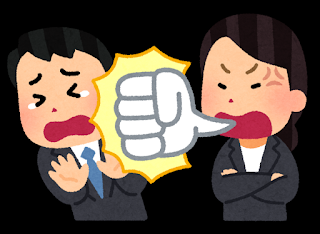 A January 2017 poll by EN-Japan indicated that 45% of business in Japan have experienced power harassment, while 56% percent are taking steps to deal with it (Kigyou no Pawahara jittai chousa). These figures indicate that power harassment is not only epidemic in Japan,  they also imply that it is endemic here.
There are several reasons why power harassment is so prevalent in the Japanese workplace. As I saw during my time as a victim, industry anti-harassment initiatives are ineffective and impossible to implement or enforce completely. Policies are hobbled by the difficulty of defining power harassment, mostly due to the vagueness of government and industry guidelines, which also explains the difficulty of acquiring accurate statistics of harassment numbers. The ‘epidemic’ has strong cultural roots in Japan’s vertical society, where abuse naturally rolls downhill, and Japanese routinely put up with verbal and other forms of abuse that would not be tolerated in my home country. This cultural discourse also encourages workers to 'toughen up' and not make any noise if harassed. Finally, although media focuses on the victim and their pain once an incident comes to light, this is precisely what goes ignored by the employer.
In my case, I reported to company harassment officers who listened to my story without doing anything, and even abandoned their investigation halfway through. The general office stepped in to mediate after things had escalated out of control, but my harassers went unpunished, while the structure that allowed their behavior went unchanged, and my settlement was meager by foreign standards. If top down policies and laws don’t affect power harassment, and if harassers are unmoved by the visible suffering of their victims, how can businesses be expected to change?
There is another way to look at the problem of power harassment that might have more effect on companies, and show that tackling harassment is in their best interests. By doing a cost assessment of power harassment, we can show that covering up or allowing the structural problems to persist is more costly in the long run than creating an environment that avoids it, or mediating on a case-by-case basis as soon as incidents come to light.
As a harassment survivor, I know firsthand that my former employer was more willing to pay for my silence than to pay to fix their problems. Moral judgments aside, was their decision to cover up power harassment actually cost effective?
First, my settlement consisted of me being paid to be absent from work while someone substituted for my classes. This means that for my final month of teaching they paid double my salary, then for the following four months after the term they lost any labor I would have done, but continued to pay me. They also recognized their responsibility in my loss of work there, entitling me to the highest class of unemployment insurance at their expense.
Next, in addition to the loss of my work, they paid office worker hours for drawing up the settlement agreement and NDA, meeting with me, writing reports, and for meetings about the incident. I imagine there were many meetings with my harassers, whose own productivity was thus cut into. The supervisor who had harassed me was a micromanager, but after the incident and my complaints he withdrew into his office, cancelling scheduled weekly meetings and monthly projects. This incurred another drop in productivity.
Third, loss of productivity and efficiency was not only directly related to me, but also extended to my colleagues and entire department. My coworkers began to record all interactions with administration staff, and physically avoided going to places where they were likely to run into them. The staff in return reduced interaction, bringing communication to a standstill.
Fourth, there was the loss in confidence of students, ie paying customers, as well as a sharp fall in talented applicants for jobs at my workplace. After I left no new full-time teachers joined the department, which meant that the section became underperforming and had to rely on part-timer staffers who did none of the extracurricular activities (such as open campus days) usually run by full-timers.
Fifth, the whole incident shed light on how anti-harassment resources were wasted. It came to light that my supervisor did not go to voluntary faculty harassment seminars, that harassment officers only followed up cases involving students, not staff, and that my case was not the first at that institution. This is not to mention the institution’s efforts to block my access to harassment guideline information, which could have been a costly illegal misstep had we gone to court.
Clearly, ‘resolving’ my harassment ran my employer into significant costs, and the damage to its reputation persists to this day. Conversely, had my employer followed through with the initial investigation, decided punishment as per their own guidelines, and came clean about the incident, they would have recouped my wages, avoided a costly drop in productivity with staff and faculty, deflected damage to their reputation among customers, and profited from re-branding as a progressive and thus attractive workplace. If businesses could be made to see that allowing silencing victims and cleaning up for harassers is a cost that they would be better off avoiding, this may be another piece in the puzzle of reducing power harassment.