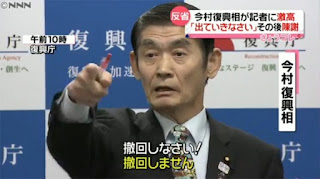 A recent brouhaha in the Japanese Diet was caused when the Cabinet Minister for Recovery,  Masahiro Imamura, stated at a press conference on April 4th that evacuees returning to Fukushima would do so on their own responsibility, shouted down a journalist who pressed him about government responsibility, then demanded an apology from the reporter and told him to take back his words and not return (Ohtsugi). Since the ruckus, a reported 20, 000 have taken to the streets of Tokyo demanding that Imamura resign for his inappropriate comments and lack of sympathy for people in Tohoku, the area affected by the March 2011 disaster.

The heart of this matter is that Japan's nuclear Neoliberal Discourse centers around the distinction between differing definitions of 'life'. There are many cognates to the various connotations of 'life' in Japanese, but in political discourse it is translated as either inochi （命）, or biological life, and seikatsu （生活）, or lifestyle. The former is seen in the vocabulary of protests in Japan, most recently in datsugenpatsu （脱原発）or anti-nuclear groups. The latter is a staple of political discourse, which promises to protect lifestyles seikatsu wo mamoru （生活を守る）.

The MP's reaction was thus a baring of the government's ideological commitment to 'lifestyle' at the expense of 'life'. In its way, Imamura's comments show the failure of what Michel Foucault called biopower. Where once biopower was exercised by the state in keeping people alive longer through medical technology (Foucault 2003: 246), faced with a growing population and the costs of keeping them healthy, the Japanese government has fallen back on the power to let the individual die.

The Fukushima meltdown, a man-made disaster exacerbated by neoliberal cost cutting and deregulation in the Japanese nuclear power industry, has accelerated Japan's response to the crisis of its aging population. Masahiro Imamura's outburst isn't only the expression of a privileged elite frustrated at the meeting of his ideology and reality, it is also an indication of the direction in which Japan's hegemonic discourse will lead the nation in future. For Japanese voters who chose Abe on his promises to 'protect their lifestyles', this incident serves to show them the price in lives the ruling class is willing to pay to stay in power.