The Picard face palm is a meme that many Facebook users know. It started in 2005 with a reference to the everyday stupid act of locking one's keys in the car ("Facepalm"), and has bloomed into a popular meme to describe the reaction to watching stupidity, especially of an ironic nature.

What gives the meme its force is the figure of Picard, a highly educated and intelligent man who cannot but hide his reaction to the blatant stupidity on display around him. As a high-ranking officer of the Federation, Picard is a figure of leftist values, championing multiculturalism, environmental protection, individual development through education over capitalist valuation as labor, as well as the advancement of science and technology.

It is interesting, then, that the Picard facepalm has recently been seen in right wing memes criticizing left wing thought. Look at this example from the 'Rowdy Conservatives' group on Facebook: 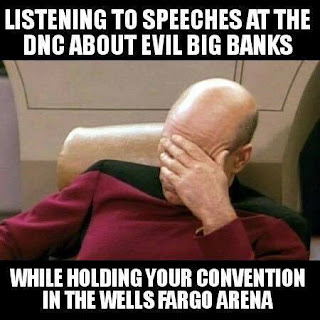 It is an interesting example of the right co-opting the imagery of liberal critiques, with the elite liberal Picard used to reflect on the tying of DNC venue to shadowy 'big banks.' Note that the RNC 2016 venue of Quicken Loans arena in Cleveland could be easily criticized in a similarly simplistic fashion, but that liberals mostly eschewed such criticisms to attack what speaker's said. From a liberal viewpoint, the attack is puerile, when critiques of policy or funding would be far more logical, yet less emotionally appealing.

There is thus a profound disconnect between word and images, between the conservative attempt at fanning moral outrage and the use of a decidedly left-leaning 'socialist' image. This is due to what Willer (2016) calls the use of 'moral reframing' in the creation of the picture, specifically the change of viewpoint for an issue towards a conservative moral judgment over liberal concerns for greater human values. The meme is designed to morally outrage the reader, but the image is of a person who keeps his moral judgments in check over actions, but who reacts to transgression of values, as liberals are wont to do. Thus, a palpable gap in words and images is felt by readers, especially those who tend towards liberal values.

Willer describes the difference between liberal and conservative discursive strategies or leanings that engenders this gap thusly:

Although this picture can be seen as merely an inexpert fusion of image and political text, complex semiotics fused to crude ideology, instead it is also an example of a meme constructed specifically to make liberals, who are supposedly more open to discourse, rethink their positions. If Picard, the porte-parole of socialism and humanism in an American symbolic fiction, can be moved to a face palm over the Democratic Party's supposed hypocrisy, shouldn't the reader feel the same?

In 'Rhétorique de l'image', Barthes distinguishes two functions for the text accompanying an image: 'ancrage' (anchorage) and 'relais' (intermediary) (1982: 31). The text anchors the image by naming it:


'la légende...permet d'accommoder non seulement mon regard, mais encore mon intellection...le message linguistique guide non plus l'identification, mais l'interprétation...le texte dirige le lecteur' (1982: 31-32).  Whereas the text linking the DNC venue and 'big banks' by itself could easily be criticized as simplistic and unfounded, when anchored to the image of the socialist Picard, they create a relay with the reader's intellect, forcing them to consider the proposition seriously in a way that the words alone could not.

In my Facebook feed, there has been an explosion of these hybrid memes, such as the one below of the 'Annoyed Picard ' used to criticize Bernie Sanders for his belief in a universal basic income: 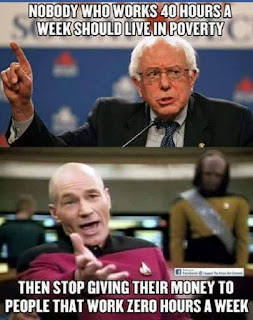 Try to analyze this image as I did the first one.
How does the shift from the external act (the stupidity that causes the face palm reaction) to internal affective display (annoyance) reflect the creator's discourse?
Does the inclusion of two figures, one real and one fictional, mean anything?
Considering that this image was taken from a Canadian relative's Facebook page, what does this imply about the spread of these 'moral reframings' to socialist societies?

Willer, Rob. (2016). "How To Have Better Political Conversations."
http://www.ted.com/talks/robb_willer_how_to_have_better_political_conversations/transcript?language=en
Posted by Tedankhamen at 6:52 PM